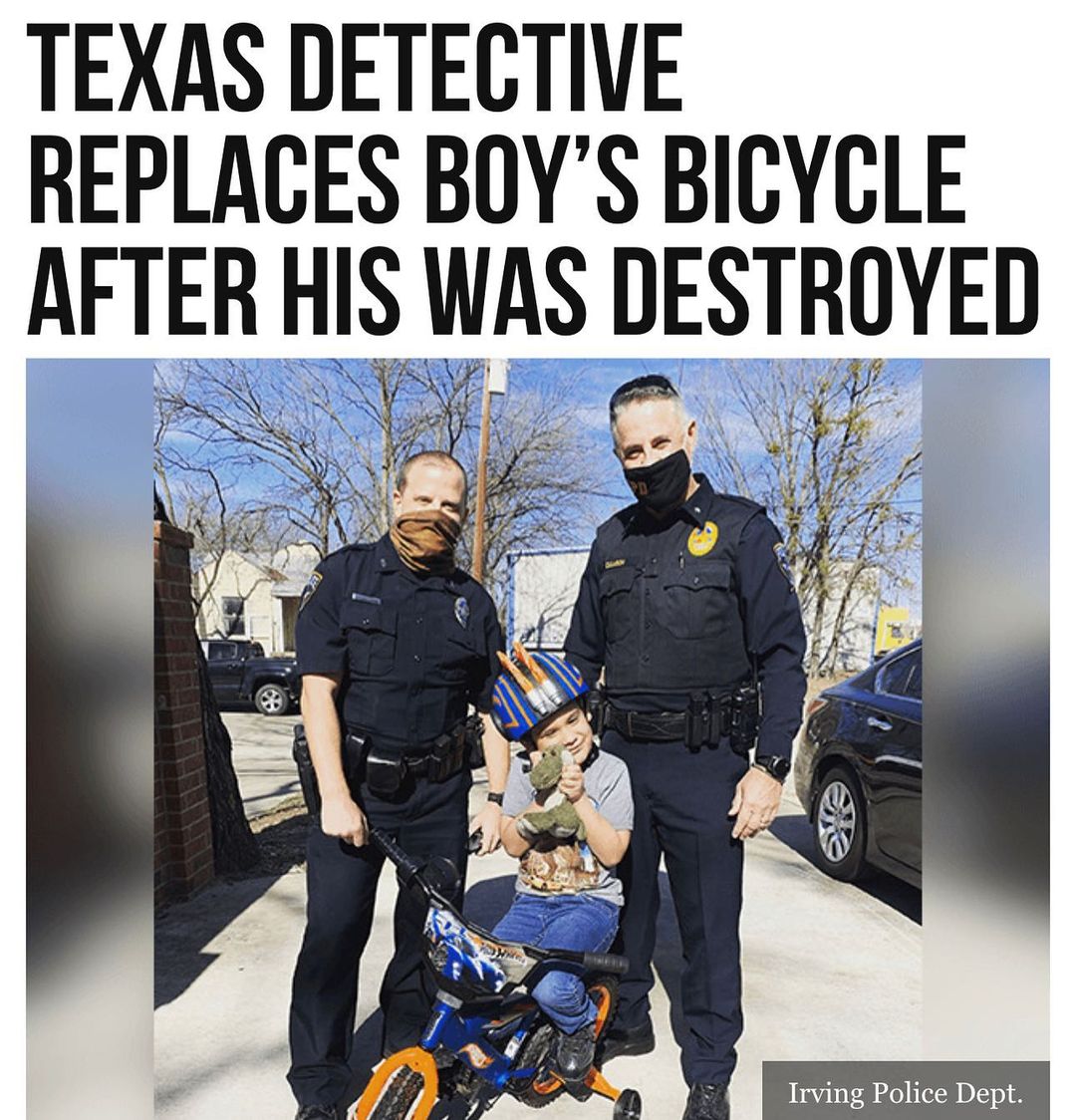 A detective in #Irving, #Texas, is being praised for surprising a little boy whose bike was recently ruined by an offender.

While Detective Josh Smith worked on a case where a person destroyed the child’s bicycle, he decided something must be done to make things right, according to Fox 4.

Smith made it his mission to get Nick another set of wheels and worked with the nonprofit group, Team Texas for Families, to donate the bike and helmet.

In a tweet Saturday, the Irving Police Department shared a photo of Smith and a fellow officer with Nick, who sat proudly on his orange and blue Hot Wheels bike:

The department’s mission is to “Deliver exceptional services and promote a high quality of life for residents, visitors and businesses,” its website said.

“Irving will be the model for safe and beautiful neighborhoods; a vibrant economy; and exceptional recreational, cultural and educational opportunities,” its vision statement continued.

Facebook users praised the officer for going the extra mile to replace Nick’s bike and make him smile.

“Precious story! We have great people in the Irving police force. It shows how much they love their work because of the dedication they have to protect and serve!” one person wrote.

“Thanks for your compassion and caring,” another commented.

In December, two police officers in Tuscaloosa, Alabama, donated bicycles to children at a local elementary school, according to Breitbart News.

“Kyle Nation, who has been with the Tuscaloosa Police Department for five years, along with Deputy Chief Severn Sanders of the department, attended Pajama Day at Martin Luther King Jr. Elementary where they surprised 16 kids with new bikes,” the report said.

The department shared photos on its Facebook page of the kids enjoying their wheels.

“We’re proud to have officers like Officer Nation who care so much about the community. We had so much fun seeing the kids choose their new rides!” the post concluded. #binspirednews

A Personal Experience with Breast Cancer: “Only a Woman If You Have Breasts? That’s Nonsense”

How to Make 0.1% Chlorine Solution to Disinfect Surfaces in Healthcare Settings