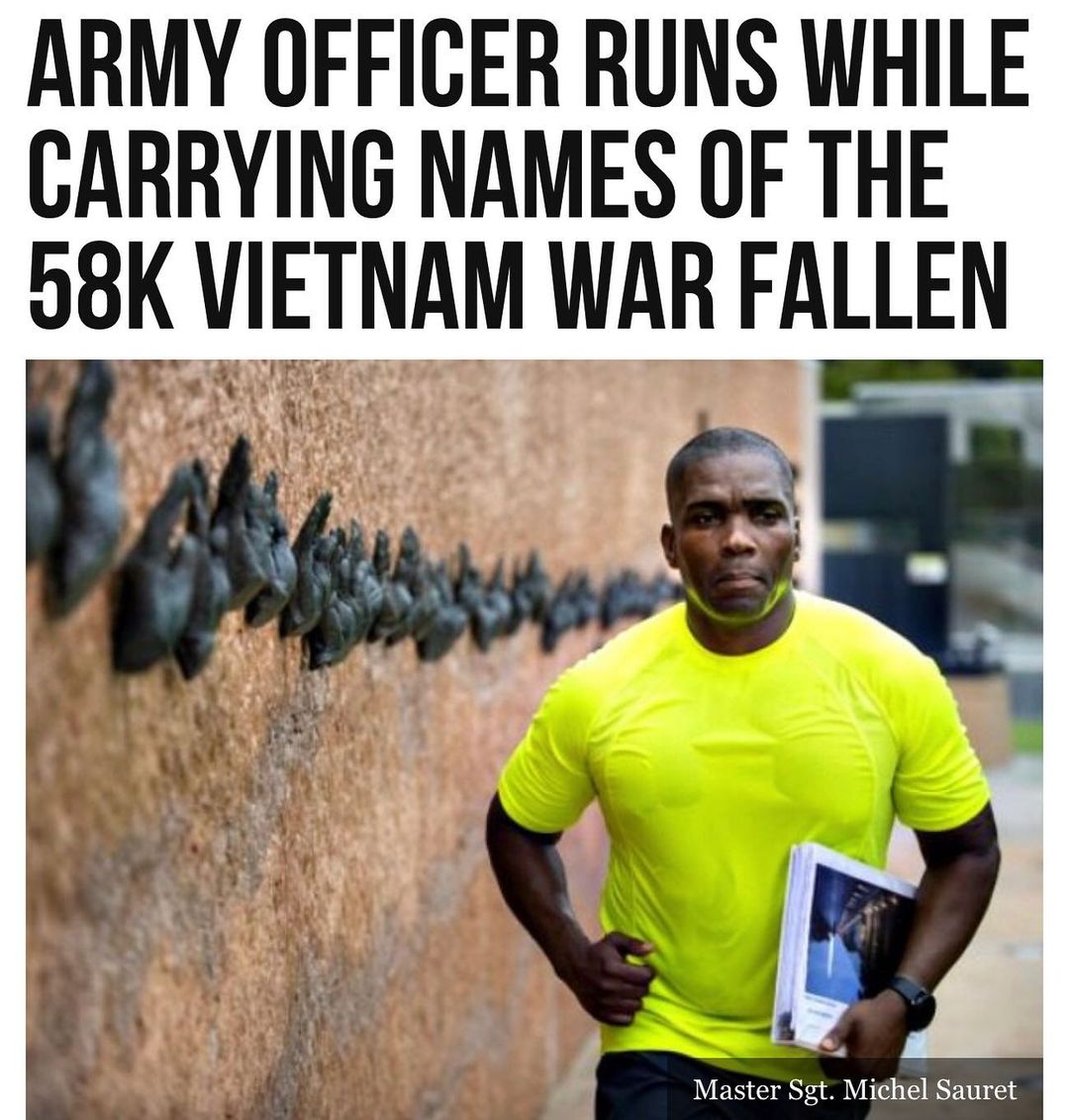 #binspired #binspirednews 🇺🇸
An Army Reserve Officer has a unique way of honoring the service members who died in the Vietnam War.

Whenever Lt. Col. Frederick Moss runs in military-oriented races, he carries with him a white binder containing each of the 58,000 names inscribed on the Vietnam Veterans Memorial Wall in Washington, DC. “It’s an act of remembrance. It’s an act of appreciation for them and what they’ve done,” Moss said.
He has carried the names while running in the Marine Corps Marathon, the Army Marathon, and the Navy Nautical. Due to security issues, some of the races will not allow participants to carry backpacks.

But that did not stop Moss from taking the names with him the entire ten miles through the nation’s capital during the recent Army Ten Miler.

Moss said he carries the binder because he also wants to honor his father and uncle’s service to their country. “We have to continue to remember those who served. My father and his comrades’ names — they meant something. We can never forget their service to this nation,” Moss said.

However, the Vietnam Veterans Memorial Fund tweeted Monday that there are still many names of service members missing from The Wall.

Moss decided to begin the tradition of carrying the binder when his father, who served as a Marine in Vietnam, passed away in 2012. “He was a Marine’s Marine. He’s a man’s man. I learned a lot from him, and I owe a lot to him,” Moss said of his dad.

He also noted that binders are an essential part of life in the Army. “I’m an Army officer guy, a stuff guy — we’ve got a binder for everything,” he told Fox News. “So I came up with this idea. How about I take the wall and print out the names and put it in a binder, and we’ll keep moving.” He said when people who lost loved ones during the Vietnam War realize what he carries with him, they always give him a hug. “Sometimes the book is a little cumbersome, but it doesn’t bother me. Because it’s 58,000-plus fallen comrades in that book. What I’m doing for this short period of time is nowhere near the price they had to pay for us,” Moss concluded.

Delta Variant: What We Know About the Science

Falling through the cracks: Hong Kong’s vulnerable pupils set back by months of online lessons at home during coronavirus crisis