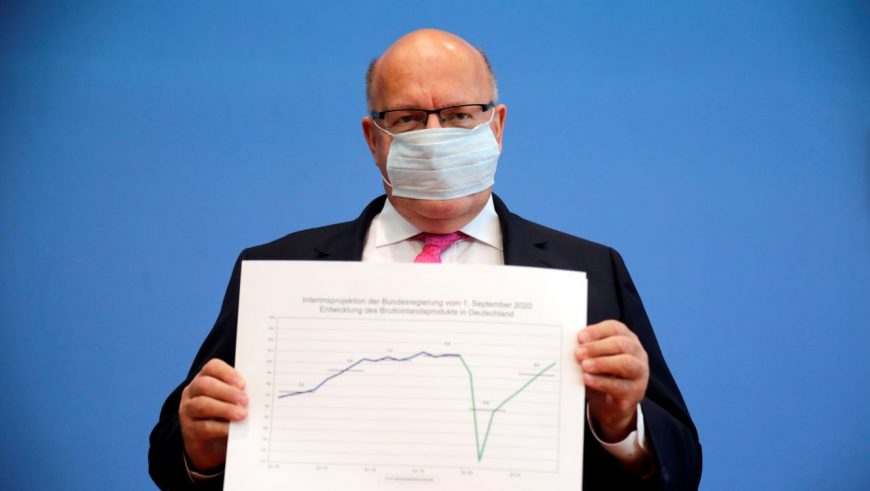 The stimulus policies being pursued by Economics Minister Peter Altmaier and Finance Minister Olaf Scholz to curb the economic crisis caused by COVID-19 are not unlike a game of extremely high-stakes poker. They have funneled hundreds of billions of euros into a wide range of rescue and bailout measures – in the belief that they will have the desired effect.

Happily, as Altmaier recently reported, they haven’t been too far off the mark. Although Germany is experiencing its worst economic downturn since World War II, it is less severe than was feared in the spring. The Economics Ministry is now forecasting a downturn of 5.8 percent instead of the earlier prognosis of 6.3 percent. Germany is faring better in the crisis than most other industrial nations.

Altmaier is also forecasting a strong upswing next year, with the economy expected to grow by 4.4 percent. If that happens, it would mean that the economic crisis triggered by the coronavirus would only be slightly more severe than the financial crisis 11 years ago, when gross domestic product shrank by 5.7 percent.

Altmaier and Scholz believe that government policies were a significant reason for this positive development, and they do indeed have a few arguments on their side.

consider themselves fortunate to have made a significant contribution to this positive development. And some of the arguments are indeed on their side: Berlin reacted quickly and decisively to the crisis and mobilized more money, as a share of GDP, than any other country in the world. More than 1 trillion euros were made available for emergency loans, guarantees and direct aid – around one-third of the country’s annual gross domestic product (GDP).

“The current figures are downright sensational.”

For the economic stimulus program alone, the German government has earmarked 130 billion euros for this year and next. The greatest share of that money is expected to be doled out by the end of this year.

It appears to be working. In June, the German economy recorded the highest month-on-month increase in exports in 30 years, with industrial orders jumping by 28 percent. Furthermore, consumer spending is recovering particularly strongly, with retail sales in May and June already back to pre-crisis levels.

The leading indicators are also pointing steeply upward. The business climate index of the Ifo Institute, a Munich-based economics think tank, has been rising for months. That index is relatively reliable when it comes to predicting economic trends for the coming months. The institute’s employment barometer is also showing a growing willingness within companies to hire new staff.

The article you are reading originally appeared in German in issue 37/2020 (September 5, 2020) of DER SPIEGEL.

“The current figures are downright sensational,” says Ifo economist Andreas Peichl. It is becoming increasingly apparent that the hoped-for V-shaped economic recovery is actually happening, with a steep decline being followed by an equally steep rise.

Does this mean the German government did everything right? Did the rescue operations actually prevent a more violent crash? And more importantly: Do they lay the foundations for a sustainable recovery?

Economics is not an exact science. Economists are at loggerheads when it comes to many questions, but there is broad consensus on the basic assessment of the German rescue program. The scale and determination of the programs made a major contribution to the fact that an even deeper slump was avoided.

The government’s attempt to stabilize the income of the German people is considered a success. Measures including expanding the government-subsidized work furlough program to an unprecedented extent. The government provided generous grants to small businesses and self-employed people whose revenues collapsed as a result of the lockdown.

“Politicians can rightly be proud.”

The result has been rather incredible. Although gross domestic product (GDP) shrank by almost 10 percent during the second quarter, disposable incomes fell by only 0.8 percent. The federal government followed an old economic policy recipe: When companies and workers are weakened in a downturn because of shrinking income, the state jumps in to try to boost demand. In that way, the government’s programs prevented what could have become a self-reinforcing downward spiral.

“That was not only economically important, but also psychologically,” says Christopher Schmidt, president of RWI Essen, an economic research institute. “The measures have stabilized expectations.” He says Germany federalist structure proved that it can act in a crisis. “Politicians can rightly be proud,” he says.

Lars Feld, chairman of the German Council of Economic Experts, which advises the federal government on economic issues, is also full of praise for the policy action taken. The council specifically singled out the moderate increase in unemployment – of just 600,000 – as a particularly notable success. “That’s relatively low considering the collapse,” he says. Germany has fared especially well, he says, in comparison to the United States, where several million jobs have been lost.

This also applies to the dent the pandemic crisis has left in government budgets. During the first half of 2020, fiscal authorities in Germany recorded a deficit of 3.2 percent of GDP – the product of exploding expenditures for rescue programs and a simultaneous decline in tax revenues. Other countries run deficits of a similar magnitude even during normal times. But because Germany has been generating budget surpluses for years, federal and state governments were able to go all out.

Still, the price for this success will be high. For 2020, the German government is planning an economic stimulus package of around 90 billion euros, or about 3 percent of GDP. Germany’s central bank, the Bundesbank, estimated in its monthly report in June that this would only ease the recession by a single percentage point. “Compared to the enormous expenditures, the effect will probably remain modest,” laments RWI head Schmidt.

Indeed, most of the recovery can be attributed to economic trends that affect the economy irrespective of government intervention. “The steep upswing that followed the crash in the spring is only logical,” says Council of Economics Experts member Feld. When large parts of the economy, such as gastronomy and retail, are shut down, as happened this spring in response to the pandemic, the economy collapses. “The reopening of these economic sectors a few months later will inevitably lead to a rapid upturn.”

But not all of the expensive instruments for fighting the crisis have worked as intended. Take, for example, the VAT (sales tax) reduction. That measure, which runs through the end of the year, was intended to stimulate consumption. The Institute for Macroeconomics and Economic Research, which has close links with Germany’s labor unions, found in a survey that only a quarter of consumers were prepared to make additional purchases as a result. The reason: Many suspect that retailers haven’t lowered their prices to reflect the change.

“I assume that companies will only pass on around half of the temporary reduction in the VAT to their customers,” Feld suspects. And the incentive for consumers to make purchases is correspondingly lower.

“The federal government runs the risk that many of its measures will have a pro-cyclical effect.”

Lars Feld, chair of the German Council of Economics Experts

Feld believes the state could use the billions of euros at its disposal more efficiently. “The federal government should use its financial leeway to allow companies to offset their losses more generously during the crisis,” he says.

Such an instrument would offer an elegant way of coping with the consequences of the collapse. It allows companies to offset their current losses against previous profits, thus qualifying them for reimbursement for any excess taxes paid. The advantage here is that the money flows quickly back into companies’ coffers. The downside is that the instrument largely favors companies that have working business models,  because without previous profits, there can be no offsetting.

Finance Minister Scholz implemented the model, but he hasn’t gone far enough for Feld and many of his colleagues. “The loss carry-back should be extended to the past three years, and its limit of 5 million euros should also be further increased,” he argues.

Even less effective than the reduction in the VAT has been the bridge loans for small- to medium-sized businesses, because few companies are taking them. The German government earmarked 25 billion euros for this program, but companies have so far only taken out 700 million euros in such loans.

Other projects still have to be approved by Brussels, and the delays have been problematic. It is quite possibly that the barriers will only be removed once that money is no longer needed because the economy has already largely recovered. “The federal government runs the risk that many of its measures will have a pro-cyclical effect,” warns Feld. “This applies particularly to the planned infrastructure measures” – including, for example, 5G infrastructure or hydrogen technology. These initiatives require considerable lead time because they are subject to sometimes lengthy approval procedures. It’s possible that they won’t be implemented until the next upswing is already in full swing.

The respected Kiel Institute for the World Economy (IfW) has warned that a number of these measures could even prove harmful. Many of them, they argue, are simply subsidies that help cement outdated and uncompetitive structures at the government’s expense.

Researchers are forecasting that the stimulus package will increase subsidies by 72.6 billion euros. Of that amount, 4.4 billion euros would be downright harmful – the funds for increasing purchase premiums for electric cars, for example. Researchers criticize the fact that the state is unilaterally promoting a certain technology at the expense of alternatives through that premium.

IfW has also identified additional areas where 14.7 billion euros is being spent inefficiently. They include funds to be used to finance lower electricity prices or the refurbishing of buildings to reduce CO2 emissions. Here, the experts are criticizing the government for rewarding certain types of behavior.

It’s problematic because it can cause unknown side effects, even though it appears to be a measure that, at least initially, costs the public purse nothing at all. For several months, companies that have fallen into difficulties because of the corona pandemic have been granted more time for declaring their excessive debt. The federal government recently extended the grace period. It will only become clear in the coming months whether the government has given companies a state-sanctioned delay on bankruptcy filings or whether the companies have actually built a bridge to better times.

In any case, RWI head Schmidt believes a completely different recipe will be more effective in the long run. “A tax reform would provide relief to both normal people and companies alike. That would be an encouraging sign after all these years of deadlock in this area.” 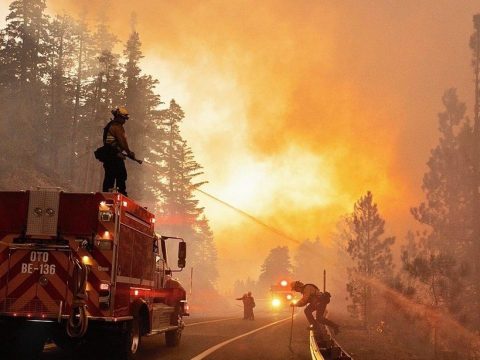 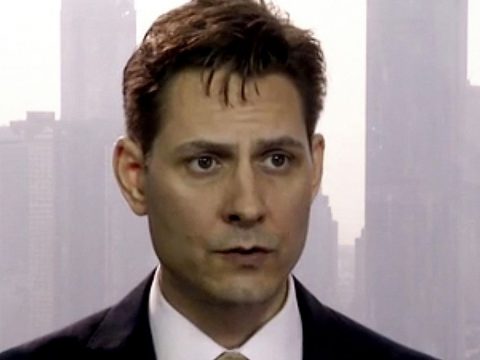 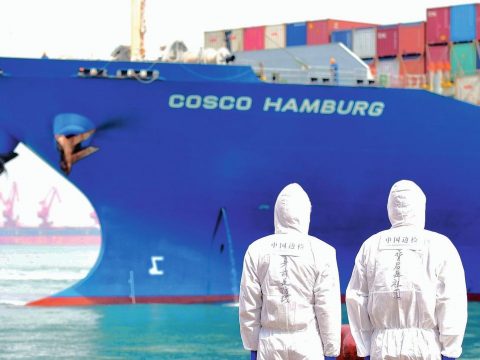 Future of Our Global Economy: The Beginning of De-Globalization