DER SPIEGEL: Dr. Farrar, will we get our normal lives back in 2021?

Farrar: I think it is unlikely that we will be able to return to a completely normal state as early as this year. 2020 was a deeply traumatizing experience for people. Many have lost relatives and friends. Children could not go to school, adults could not go to work. Today, when you see footage of people crowding into public transport, sporting events or theaters and cinemas, close together, it looks like a different time. It will take time for us all to regain confidence.

Jeremy Farrar, 59, is director of the Wellcome Trust, leading the world’s second largest foundation supporting medical research. The scientist was head of the clinical research unit  at the Hospital for Tropical Diseases in Ho Chi Minh City in Vietnam for 18 years and is an adviser to the World Health Organization.

DER SPIEGEL: Will we be able to beat the coronavirus this year?

Farrar: If we get it right, yes. We know how to keep the virus at bay with contact restrictions. In addition, large populations around the world could be vaccinated against COVID-19 in the first half of the new year. With both measures together, we can hope that next autumn or winter will mark the beginning of the post-COVID era. First, however, we are now entering a new dangerous phase of the pandemic.

DER SPIEGEL: You mean the new variants of the virus that have appeared in Britain and South Africa?

Farrar: Yes. These mutants are significantly more contagious and have become the dominant virus variants in these countries in just a few weeks. The British mutant has already been found in several other countries, including Germany. I think it is inevitable that these new variants will spread and soon become dominant around the world. This will make it much more difficult to control the pandemic — and it could get worse if the virus continues to change. So, we are now in a dramatic race against a changing virus that is under an enormous immune pressure.

DER SPIEGEL: What do we have to do to win the race?

Farrar: Firstly, we have to take really tough urgent measures to slow down the spread of Sars-CoV-2 and its new variants. And secondly, we have to vaccinate large parts of the global population as quickly as possible in the first half of 2021 — we have to do it before the summer. If we were to take until autumn, that would not be fast enough. We would see another wave in the winter of 2021. So, Germany, for example, has to vaccinate more than 4 million people per week. We are facing a huge challenge.

DER SPIEGEL: But the goal of vaccinating large parts of the population by summer cannot be achieved with the two vaccines from BioNTech, which is already being administered, and Moderna, which es expected to be authorized for use in Europe this week.

Farrar: That’s true, these mRNA vaccines are important, but there will soon be other vaccines. The vaccine from AstraZeneca and Oxford University has just received emergency approval in the United Kingdom. Hopefully, the vector vaccine from Johnson & Johnson will also be approved soon. These vaccines are so important as they can be used worldwide. With the AstraZeneca vaccine, the efficacy is between 62 and 90 percent, and we know that it can prevent severe disease. None of the study participants who received the vaccine had to go to hospital.

DER SPIEGEL: Is there a danger that the vaccines will no longer work against the new variants?

Farrar: So far, there are no indications of that. So far, there is no evidence of this. But there are fears that monoclonal antibodies developed for the acute treatment of COVID-19 patients might not work as well in the South African variant. If the virus is allowed to spread unchecked, the risk grows that mutations will emerge that give Sars-CoV-2 an even greater advantage. It is only a matter of time. It would not be a surprise if at some point the virus changed so much that the vaccines no longer worked. Then we would have to watch helplessly as the pandemic returns, even if everyone has already been vaccinated — a horror scenario.

DER SPIEGEL: Can we prepare for such an emergency?

Farrar: We urgently need to develop second-generation vaccines and drugs that target more proteins of the virus evading the new variants. And we need to keep a very close eye on how the virus evolves all over the world. In order to detect new variants in time, it is necessary to decode the genetic sequence of the virus in many more samples of infected people. Unfortunately, Germany – like many other countries – is not sequencing anywhere near enough viruses. Germany has a lot of catching up to do. New mutants may arise anywhere in the world, so it is in all our interests to support the World Health Organization (WHO) to coordinate surveillance globally.

DER SPIEGEL: You have always advocated keeping schools open as long as possible. How should Germany proceed after the end of the Christmas holidays?

Farrar: It is tragic, but I think it is impossible to reopen the schools in Germany quickly because of the level of infections. Such a measure would greatly accelerate the spread of the virus and the new variant.

Recent estimates suggest that up to 85 percent of the world’s population would need to develop immunity to SARS-CoV-2 through vaccination to stop the pandemic.

DER SPIEGEL: What surprised you most about the coronavirus pandemic?

Farrar: That Africa has so far been much less affected than feared. I had expected the novel coronavirus to be a huge problem for the continent; but at least so far, that hasn’t turned out to be the case.

DER SPIEGEL: Could that still change?

Farrar: Unfortunately, yes. Africa has decades of experience with epidemics, the population is younger than in Europe, less connected, and the warmer climate has also helped. But I fear the new variant from South Africa could soon spread across the entire African continent and change everything. That worries me a lot.

DER SPIEGEL: You campaigned early on for a fair distribution of vaccines. Will that succeed?

Farrar: There is a chance — and it must succeed. Fair distribution of vaccines is not just for moral reasons. If we start by vaccinating only people in rich countries, while allowing the virus to continue to spread unchecked in Africa, in India and in Central and South America, then new variants will emerge in these parts of the world. And these new variants will inevitably come to Europe. Then we’ll be back to square one.

“We can hope that next autumn or winter will mark the beginning of the post-COVID era. First, however, we are now entering a new dangerous phase of the pandemic.”

DER SPIEGEL: Why wasn’t Europe able to cope better with the pandemic?

Farrar: SARS-CoV-2 is a very difficult virus to control. It has now reached every continent on the planet, even Antarctica, hundreds of millions of people probably have already been infected. In Europe, we have an aging population that is vulnerable to severe disease. Our continent is also densely populated and there is a big difference between rich and poor, which also contributes to the spread of the virus. And finally, Europe has little experience in dealing with severe epidemics, unlike Asian countries like Vietnam…

DER SPIEGEL: … where you lived for many years as a researcher and doctor…

Farrar: … and which copes well with the new type of coronavirus. I was in Vietnam in 2003 when there was an outbreak of the lung disease SARS and shortly afterward of bird flu. There is dengue fever, malaria and many other infectious diseases there. Countries like Vietnam are used to dealing with epidemics.

DER SPIEGEL: Vietnam has a one-party system like China. Are dictatorships better suited for fighting pandemics?

Farrar: No, I don’t think so. Look at Norway, Finland, Ghana, New Zealand and Australia. Those are all democratic countries, and they have all controlled the virus very well. What matters most is the long-term investment in public health and the ability of the respective government to be honest with its citizens. It’s about the trust between the citizens and the politicians, about the right communication strategy.

DER SPIEGEL: What do you mean by that specifically?

DER SPIEGEL: So, was it wrong to raise hopes in Germany that there would not be a second shutdown?

Farrar: People want transparency and honesty. It becomes difficult when academics or politicians promise too much and deliver too little.

DER SPIEGEL: How will this pandemic change the world?

Farrar: It is the first real challenge of the 21st century on a global scale. There’s no way we can go back to business as usual afterward. I really hope that this pandemic will force us all to question the way we live. I hope this epidemic will make us realize how vulnerable we are, not only to pandemics. Just think of what multi-resistant germs or climate change can do.

DER SPIEGEL: Are you an optimist?

Farrar: Absolutely. But if you don’t change things after a crisis, that crisis will repeat itself. Because of the horrors of two world wars, the United Nations was founded, the World Health Organization, the World Bank, and others. These were important reforms that have helped us live in a better and safer world than ever before. There must be such a joint global effort again now. 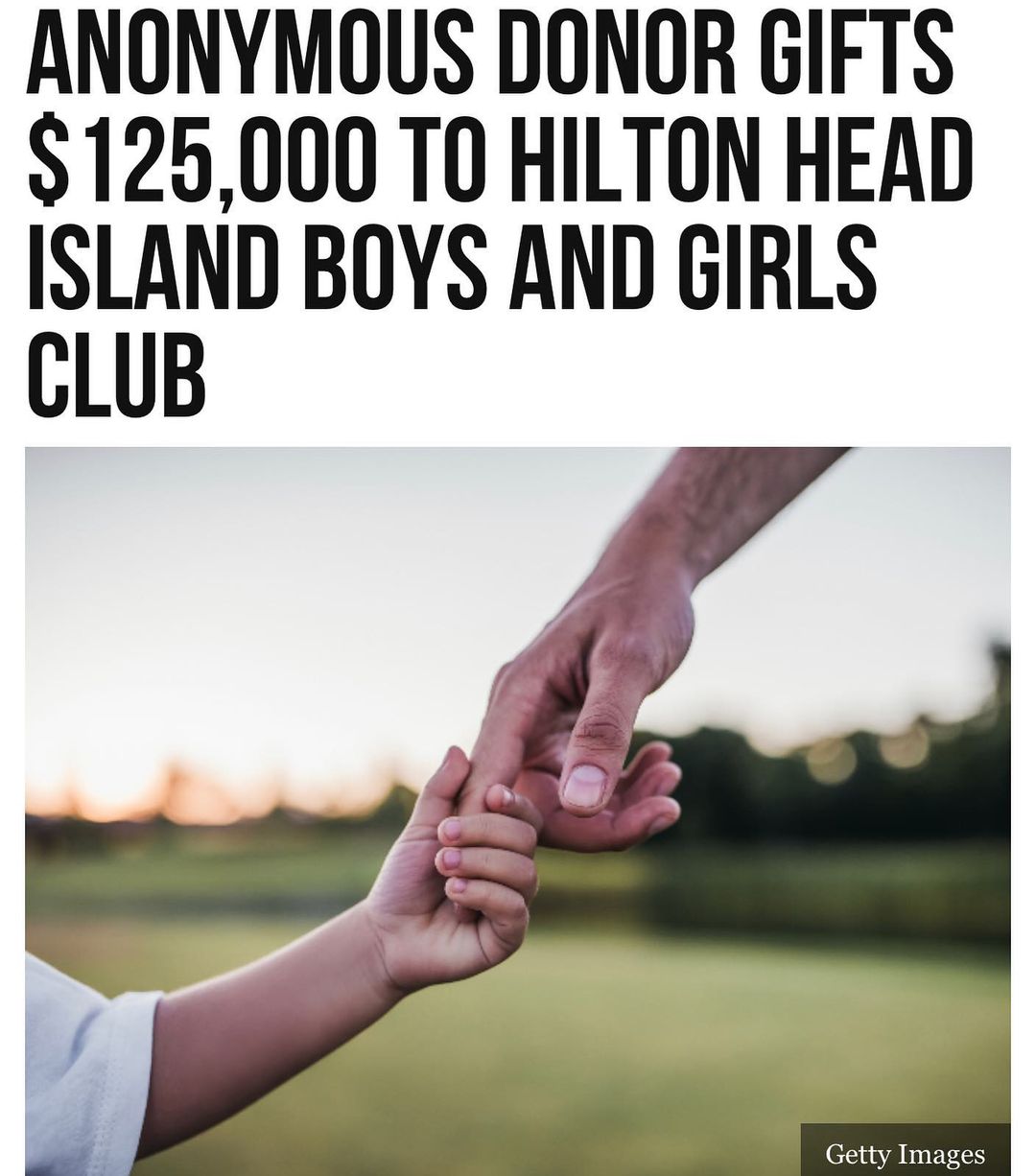 The Boys & Girls Club of #HiltonHeadIsland, #SouthCarolina, has had to close tem…